Employers across the UK are struggling to hire enough staff as Covid restrictions ease amid nationwide worker shortages- worst since the 1990’s, despite the increase of hiring activity in recent months. The worst affected sectors are warehousing and transport, care, hospitality, manufacturing, and food preparation, among others.

According to a report by KPMG, businesses frequently blamed the shortfall in labour to a reluctance from potential candidates to seek new roles because of the ongoing uncertainty caused by the pandemic, as well as furloughed staff and shortage of European candidates.

Official figures show about 1.5 million workers are still furloughed with pandemic restrictions still limiting a full return to work, after the government pushed back the date for the end of most pandemic restrictions to 19 July and the Delta variant is contributing to rising infections. Furthermore, an estimated 1.3 million non British workers have left the country during the pandemic. Business leaders said easing post-Brexit immigration rules could help address shortages, but also called for further investment in skills and training from the government to increase the numbers of domestic candidates.

The shortage comes as hiring activity among businesses surged in May, with demand for workers increasing at its fastest rate for over 23 years. Sustained labour shortages could lead employers to push up wages, which could in turn feed through to rising inflation if companies raise their prices to accommodate higher wage bills. However, there is debate about whether bottleneck pressures as the economy reopens from lockdown will translate into a permanently tighter jobs market. 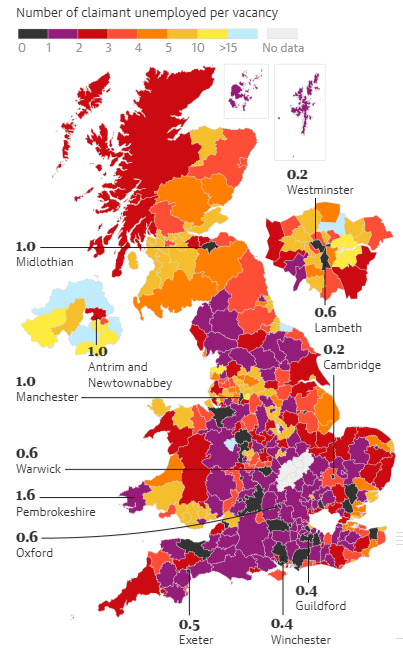