Last month, the multi-billion, technology inspired taxi firm lost a landmark employment case that could potentially affect tens of thousands of workers in the nations’ so called ‘gig economy’. Since the establishment of the global, ride-hailing taxi app, Uber’s UK workers were officially classed as self-employed. Why? Arguing that it was a tech firm, rather than a transport firm, Uber suggested that its drivers were working on an irregular basis and therefore were individual contractors offered the flexibility and freedom of working, when and where they want. The workers’ downside – Uber was not obliged to provide the statutory employment rights that full-time workers might expect.

After two Uber drivers raised an employment tribunal, arguing that they did in-fact work as employees for the taxi company rather than for themselves, it became apparent that they weren’t alone. One of the workers mentioned he was under “tremendous pressure” to work long hours and that there were significant “repercussions” if he were to cancel on accepted jobs. He also revealed that, for some months, his average hourly rate was around £5 an hour, significantly under the minimum of £7.20, the legal requirement employers are obliged to pay their employees.

The end result? A “monumental win” for the GMB Union, the body that backed the workers. So, what does this landmark win mean for Uber and the wider market? Well, Uber will be legally obliged to amend its current contracts and provide its workers with statutory sick pay, holiday pay, pension contribution and all other legal requirements. If ignored or under-maintained, Uber could be at risk of breaching various UK employment laws, including the newly instituted Modern Slavery Act 2015.

Employment experts said that other firms with large self-employed workforces could now face similar action. “This judgment is likely to have massive implications, as we see an increasing number of start-up businesses effectively adopting Uber’s model,” said Tim Goodwin of law firm Winckworth Sherwood. “The effect of this judgment is that those kinds of business may owe a lot more to their workers, such as paid holiday and minimum wage, than they had bargained for.” 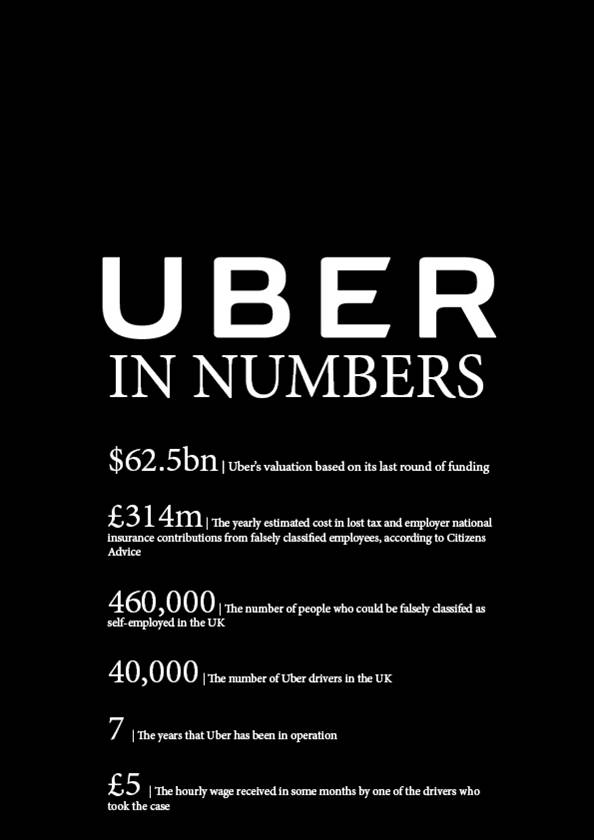 Following this ruling, many organisations in the UK may be at risk of breaching UK employment laws, through unknowingly misclassifying their employees/workers. To ensure that you know the difference between workers (self-employed) and employees, we have created a table that can be used to differentiate between the two:

If you have any queries on the matter, or would like to speak to a professional, feel free to contact Datum RPO, or alternatively, request a free audit.