Throughout 2018, to celebrate our 20th Year Anniversary, we are supporting 20 charities, with a year-long campaign of fundraising activities, events and celebrations.

During the January period, we will be choosing charities/charitable organisations to be part of this occasion, through a nomination system (nominations are now closed, more information can be available at: https://passionateaboutpeople.co.uk/20-20/).

We are pleased to announce that we have chosen the final 5 charities/charitable organisations for the 2018 #PAP2020 charity support year. They are as follows:

Cots for Tots - Nominated by Mike Simmonds & 1 other 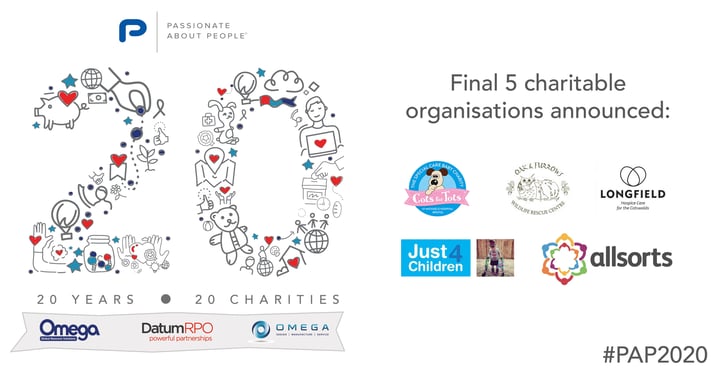 Congratulations and we look forward to working with you throughout 2018!

So, with all the charities now confirmed, we are proud to announce the final list as follows:

Cots for Tots - Nominated by Mike Simmonds & 1 other

The Friends of the Milestone School - Nominated by Amber Deacon

The Hollie Gazzard Trust - Nominated by Kirsty Muir & 2 others

For all the charities involved, you will receive an email within the next week confirming your place on our #PAP2020 list of charities, and our proposed next steps. Just to clarify, you need not do anything at this stage!

For all those that were nominated but weren't chosen, we've got some good news. We are currently in the process of choosing additional charities to work with throughout 2018, alongside the #PAP2020 list of charities. This can include anything from sponsored events to local community support! Be sure to check our webpage for regular updates on these secondary charities.

For more information on the final 20 charities, and the reason for nomination, visit our Passionate About People 20-20 webpage: https://passionateaboutpeople.co.uk/20-20/

About Passionate About People:

Passionate About People believe that there is more to business than just profits, a sentiment which is reflected in our name. Our values and behavior form the DNA of our organisation, and has been since our inception in 1998, forming the backbone for sustainable growth.

We have built an engine that is geared up to deliver quality, satisfaction, scale and sustainability enabling us to fulfill our growth ambitions into the future.

Hard work, dedication and passion are key attributes that our staff have in delivering bespoke solutions with first class customer service and the continued CSR, financial and social investment.